A generic error occurred in gdi+

I had the above error the other day when using a new install of Sitecore. At first the error doesn’t seem to reveal much, and it quite … generic :) . This was happening when I was trying to create a new rendering through the developer centre in the Sitecore desktop. The full error was: 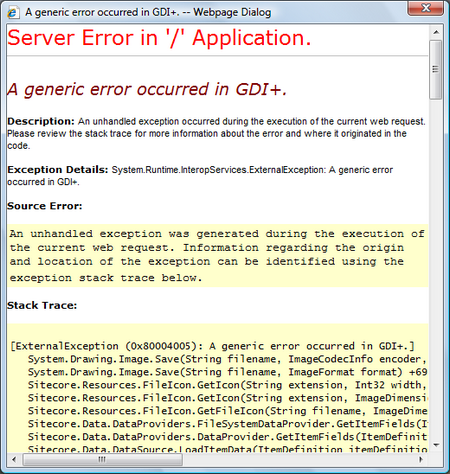 For those that don’t know, GDI+ is basically the .net drawing subsystem. It is a hook into the Windows GDI subsystem. Normally when you start getting errors in GDI+ it indicates a low level problem, or some bad parameters or something.

And if we start to read the stack trace above we can see that an Image was being saved when the error occurred. But all I was doing was creating a new rendering. That’s not an image. And this error happens when the dialog tried to open before I have a chance to even select anything. I know from playing with the wizards in Sitecore’s Sheer UI that each wizard view can have an associated image which is displayed. That’s the only image I could think of in this instance.

just thought i’d give you the heads up…
this error is also quite common when trying write a resized PNG file to a memory stream which is caused by only using a one way seekable stream (the response stream)
more info: http://www.west-wind.com/WebLog/posts/8230.aspx